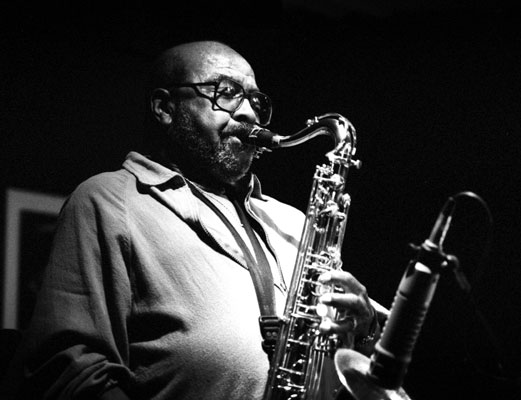 In 1946, following service in the United States Air Force, Moody joined the seminal bebop big band of Dizzy Gillespie, beginning an association that – on stage and record, in orchestras and small combos – afforded a young Moody worldwide exposure and ample opportunity to shape his improvisational genius. Upon joining Gillespie, Moody was at first awed, he now admits, by the orchestra’s incredible array of talent, which included Milt Jackson, Kenny Clark, Ray Brown, Thelonius Monk. The encouragement of the legendary trumpeter-leader, made his mark on the young saxophonist. His now legendary 16-bar solo on Gillespie’s Emanon alerted jazz fans to an emerging world-class soloist.

James MoodyDuring his initial stay with Gillespie, Moody also recorded with Milt Jackson for Dial Records in 1947. One year later he made his recording debut as a leader James Moody and His Bop Men for (Blue Note).

James MoodyDuring his initial stay with Gillespie, Moody also recorded with Milt Jackson for Dial Records in 1947. One year later he made his recording debut as a leader James Moody and His Bop Men for (Blue Note).

In 1949 Moody moved to Europe where in Sweden he recorded the masterpiece of improvisation for which he is renowned, Moody’s Mood for Love. Returning to the States in 1952 with a huge “hit” on his hands, Moody employed vocalist Eddie Jefferson. Also, working with him during that period were Dinah Washington and Brook Benton.

In 1963 he rejoined Gillespie and performed off and on in the trumpeter’s quintet for the remainder of the decade. Moody moved to Las Vegas in 1973 and had a seven year stint in the Las Vegas Hilton Orchestra, doing shows for Bill Cosby, Ann-Margaret, John Davidson, Glen Campbell, Liberace, Elvis Presley, The Osmonds, Milton Berle, Redd Foxx, Charlie Rich, and Lou Rawls to name a few.

Moody returned to the East Coast and put together his own band again – much to the delight of his dedicated fans. In 1985, Moody received a Grammy Award Nomination for Best Jazz Instrumental Performance for his playing on Manhattan Transfer’s Vocalese album thus setting the stage for his re-emergence as a major recording artist.

Moody’s 1986 (RCA/NOVUS) debut Something Special ended a decade-long major label recording hiatus for the versatile reedman. His follow-up recording, Moving Forward showcased his hearty vocals on What Do You Do and his interpretive woodwind wizardry on such tunes as Giant Steps and Autumn Leaves.

james MoodyMusic is more than a livelihood to Moody, so much so that portions of Sweet and Lovely, dedicated to his wife, Linda, figured prominently in the saxophonist’s wedding ceremony on April 3, 1989. As well as being on the album, Gillespie was best man at the wedding for his longtime friend. The bride and groom walked down the aisle to Gillespie’s solo on Con Alma then everyone exited the church to the vamp on Melancholy Baby. As their first act of marriage Linda and James Moody took communion accompanied by the groom’s recording of Sweet and Lovely. In 1990, Moody and Gillespie received a Grammy Award Nomination for their rendition of Gillespie’s Get the Booty, which showcases scatting at its best. Moody returns the soprano sax to his woodwind arsenal on Honey, his nickname for his wife, Linda, and Moody’s last recording for (RCA/NOVUS).

On March 26th, 1995 Moody got the surprise of his life with a birthday party in New York. It was an evening of historical significance for Jazz with many guest stars and Bill Cosby as the emcee. It can be heard on Telarc’s recording, Moody’s Party– James Moody’s 70th, Birthday Celebration, Live at the Blue Note.

In 1995 Moody’s (Warner Bros.) release of Young at Heart, was a tribute to songs that are associated with Frank Sinatra. With an orchestra and strings many people feel this is among the most beautiful of all James Moody recordings.

Moody’s last recording for Warner Bros. is Moody Plays Mancini which showcases Moody on all of his horns and flute. A tribute to the American icon Henry Mancini.

Moody’s 2004 release of Homage on the Savoy
Label has been a great cause for celebration. His first new studio album in 6 years, the aptly named Homage is a tribute to Moody featuring new tunes specially written for him by the likes of Joe Zawinul, Chick Corea, Kenny Barron, Horace Silver, Herbie Hancock, David Hazeltine and Marc Copland. Bob Belden produced the project.

Whether Moody is playing the soprano, alto, tenor, or flute, he does so with deep resonance and wit. Moody has a healthy respect for tradition, but takes great delight in discovering new musical paths, which makes him one of the most consistently expressive and enduring figures in modern jazz today. To quote Peter Watrous of the New York Times, “As a musical explorer, performer, collaborator and composer he has made an indelible contribution to the rise of American music as the dominant musical force of the twentieth century.” James Moody plays on Keilwerth saxophones exclusively.